Few things in life are as heartwarming as watching a mother dog interact with her puppies. From the moment of their birth to days after they go to their new homes, a mother dog’s focus is completely on the well being of her babies.  It's one of the most beautiful things to witness. 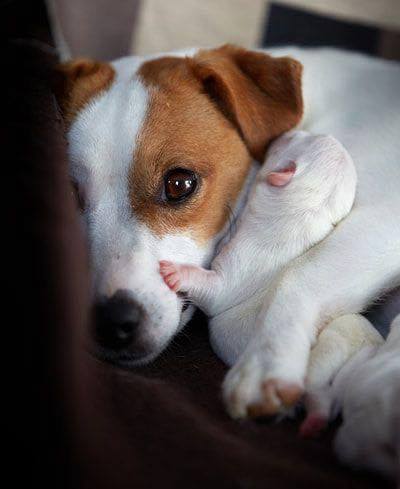 A Bond From Birth

As each little puppy makes its entrance, its mother carefully tends to its first needs — licking and cleaning her newborn to stimulate breathing and to encourage nursing. As her newborn puppies knead and suckle, she curls her body around them for protection and warmth – hearts beating in unison. Every lick, which is a doggie kiss, reinforces the mother-puppy bond. A mother dog whines to alert her humans if she’s separated from her puppies. She paces nervously back and forth between a tiny still-unseeing puppy that scoots to the other side of the room and the rest of her litter. When necessary, a mother dog will put herself between her puppies and danger. She won’t let strange dogs approach, and if she senses that a human might harm her little ones, she issues a warning growl. A mother dog nuzzles her pups, placing her face close by or lying very still when one of her little ones wiggles into the crook of her neck for a nap. As her offspring grow, she will still seek out their company, and it isn’t unusual to find a mother dog and weaned puppies still snuggling together. Dogs smile with their tails. During playtime and upon greeting her pups, a mother dog wags her tail to show her affection and happiness. When the puppies reach eight weeks of age and go to their new homes, their mother, who feels lost without her litter, can show signs of depression. She might search for her missing babies, whining for her owners to help her. In a few days, she’ll perk up.  If she has another litter in the future, she’ll love and care for them just as much as she did her last litter.